skip to main | skip to sidebar

An Interview with Mr Zanal 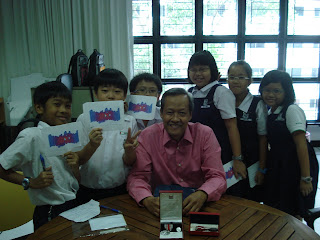 Aston: Good afternoon, Mr Zanal. I am Aston Chin from P4 Earnest. Today, I have the honour to conduct an interview with you about Rosyth School. With me are my friends, Arman, Hady, Ariel, Janlyn and Jessie. Together, we shall ask you many questions about Rosyth School; old and new. 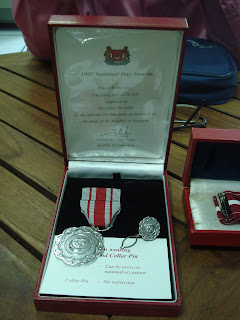 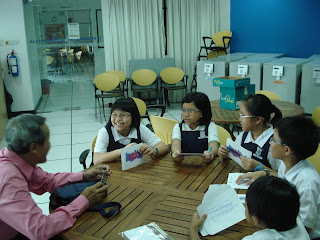 Hady: Who was the most memorable student? Why?
Mr. Zanal: Every student is special. I remembered that there was a year when a student had gone missing from her home on Teachers' Day. My colleagues and I spent many hours to look for her. Finally, she returned home, safe and sound.

Hady: Where was Rosyth School originally situated?
Mr Zanal: The original Rosyth School was located in Tampines before it was relocated to the building at Rosyth Road. Then, in 2000, the school moved to Serangoon Avenue 4. 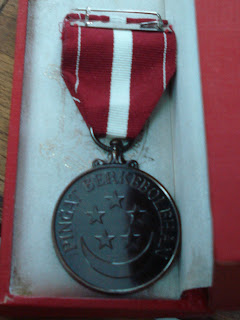 Efficiency Medal awarded by the President of Singapore

Ariel: What does the motto of Rosyth School mean to you?
Mr. Zanal: The motto 'Ready to Serve' means a lot to me. I am ready to serve my school and Singapore.

Ariel: Which subjects do you teach besides Malay?
Mr. Zanal: P.E. It keeps me fit until today.

Janlyn: If you are now in your 20s, would you still consider teaching and why?

Mr. Zanal: Yes, I will still want to be a teacher. I can learn many things through teaching the subjects. I can learn more about human behaviour. Until today, I am still learning.

Janlyn: How many children do you have?
Mr. Zanal: I have 4 children; 3 boys and 1 girl. The eldest is a teacher. One is a fashion designer, one is a dance instructor and the youngest is still studying in a polytechnic.

Jessie: How do you keep fit despite your age?
Mr. Zanal: During P.E. lessons, I exercise together with my students.

Jessie: How long have you been married?
Mr. Zanal: My wife, Ros, and I have been married since 1974.

Aston has also written a biography of Mr Zanal.

Mr. Zanal is a long-serving teacher in Rosyth School. He was born in Singapore on 31st January 1949. He started teaching in 1967 in Tanjong Katong School. Two years later, he taught in Rosyth School and that was on 25th August 1969.

Mr. Zanal had taught in Rosyth School for forty years. Many parents, brothers and sisters of the present pupils in Rosyth had been taught by him before. He is fondly remembered by his pupils even though they had already graduated and left the school.

Mr. Zanal was married in 1974 to Ros, his wife and they had four children. His eldest child had followed his footstep and became a teacher. Another child of his is a fashion designer and another is a dance instructor. His youngest child is still studying in a polytechnic. Mr. Zanal got married when he was in his twenties. In one of his photographs, he looked very young and groovy in his broad and thick-framed glasses and tight clothing.

Being a sporty person, Mr. Zanal likes to play badminton. One of his favourite subjects is Physical Education where he could keep himself fit by exercising with his students. Mr. Zanal has a great passion for teaching. He said that if he is to relive his life, he will most certainly be a school teacher again.

His own results in school were excellent. He passed with flying colours in all his subjects. He received a Long Service Medal from the Ministry of Education and an Efficiency Medal from the President of Singapore in 1985. These are added to his accolades.

Mr. Zanal is now retired but he continues to help out at Rosyth School. That is why we still see him teaching in school. We are all very proud of his dedication and hard work. Mr. Zanal, well done. Hip! Hip! Many cheers for you!

Thank you, Mr Zanal for your dedication to teaching Rosythians all these years. We are proud of you!